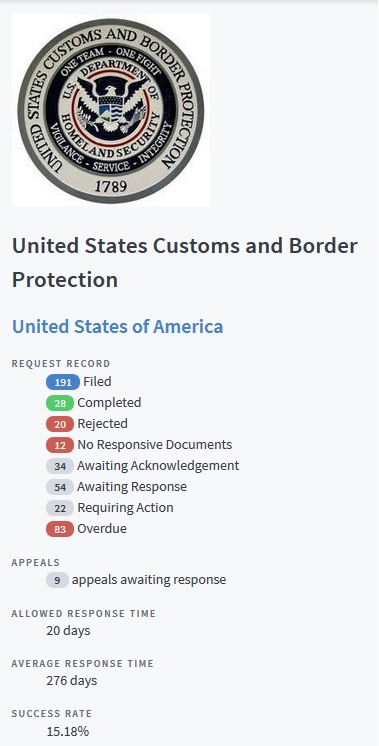 With just a 15% success rate for MuckRock requests, and a lethargic 276 day response time, United States Customs and Border Protection (CBP) is not really known for their transparency. As Melissa Crow, of the American Immigration Council, said in an American Immigration Lawyers Association (AILA) press release just last year, “CBP unfortunately has a long history of ignoring requests for information that may be inconvenient.”

On two recent CBP FOIA requests of mine, the agency crossed the line from frustration into absurdity. One of the requests was for CBP contracts with the Israeli forensic tech company Cellebrite, the other was for a contract with SNAP Inc., (a different company than the maker of Snapchat which bears the same name), who recently sold a biometric identification system to CBP.

I located these respective contracts on the Federal Procurement Data System - an extremely useful tool if you need to locate information on a federal contract. Keenly aware of CBP’s reputation, I was careful to provide CBP with as much information as possible - these requests featured everything from contract ID numbers, to DUNS numbers, to dates and IDV numbers. Pretty much everything a federal agency could want to be able to locate a contract.

Or so I thought.

Almost five months later, CBP wrote to me “After careful review of your FOIA request … we have determined that your request is too broad in scope or did not specifically identify the records which you are seeking.”

Even for an agency which has had CBP’s history of hostility to being held accountable, this is extremely disappointing. When I saw the response, I couldn’t help but laugh - I really don’t know how I’m supposed to identify these records any better without going to their FOIA office and conducting the search myself.

I have been drafting an appeal I will file sometime this week. If you are a reporter, researcher, or just a FOIA enthusiast, and have had similar experiences with CBP or another agency, please let us know at info@MuckRock.com, or on Twitter @MuckRock.