A formerly SECRET memo from the White House shows that not longer after Seymour Hersh published an expose in the New York Times about the domestic operations of CIA, President Ford met with his advisors to discuss the allegations. Joining him in the Oval Office was James Schlesinger, the Secretary of Defense and former CIA Director, along with Brent Scowcroft and other senior advisors. The purpose of the meeting was to discuss the history of the allegations, what to do, and what the investigation needed to look like. 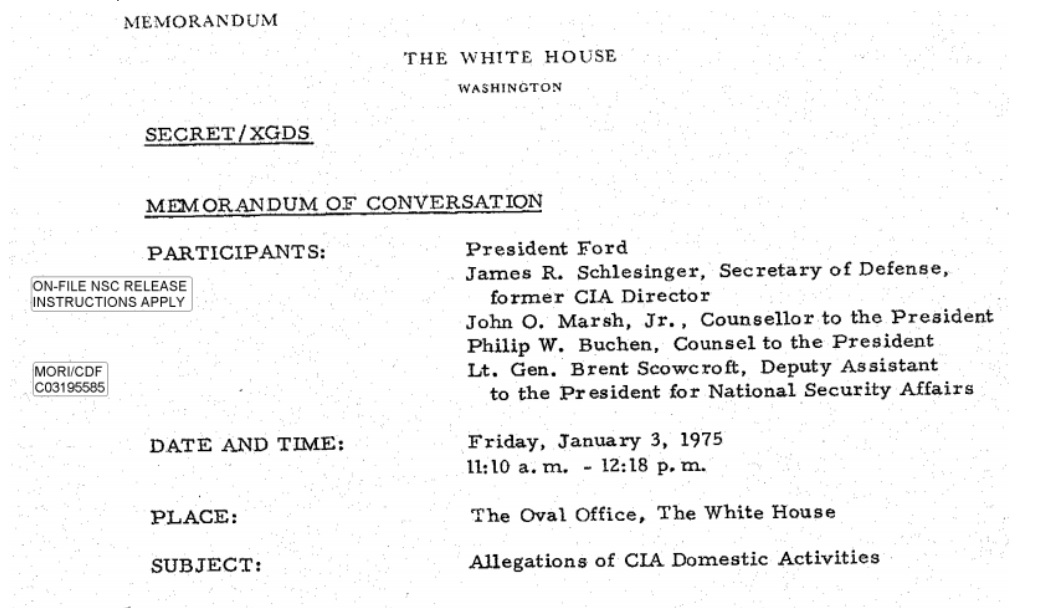 According to John Marsh, the Counsellor to the President, the intelligence division was set-up by John Doar under Ramsey Clark. According to Marsh, “it was directed toward the dissident movement which was against the war” until their mission was refined by a memo written by then-CIA Director Richard Helms. During the Nixon Administration the operations were co-opted by the Huston Plan, which circumvented the National Security Counsel and the Department of Defense. Despite orders to desist after only three days, they apparently continued operating this way for about three years. 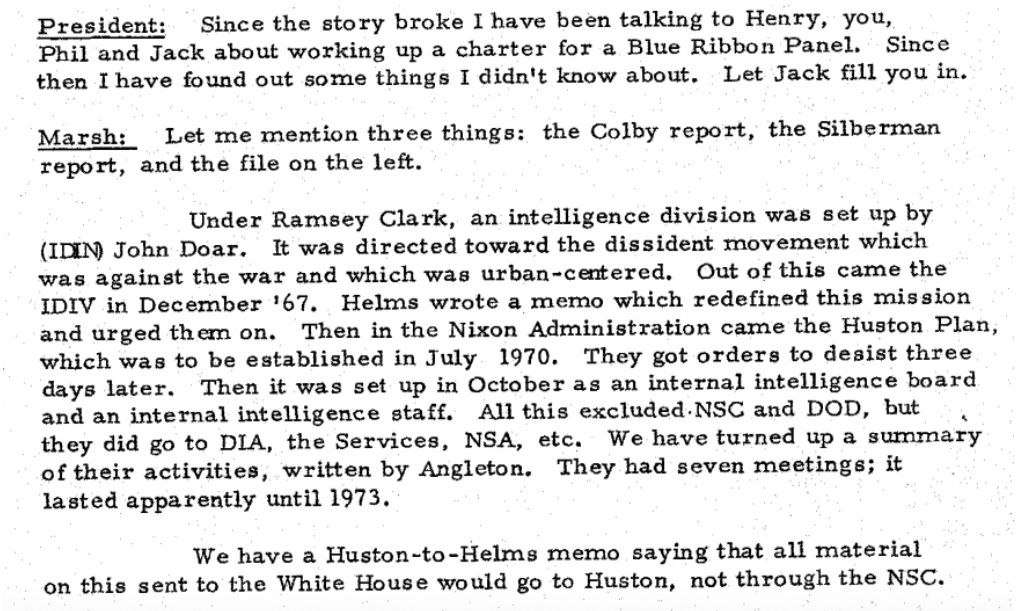 Schlesinger briefly brought up CIA’s Family Jewels, describing its contents as being CIA’s “extra curricular activities.” The mention of the CIA’s Family Jewels prompted Ford to ask whether CIA was involved in Watergate. This was a very pertinent question considering it was the Agency’s connections to Watergate, in the form of current and former CIA employees Howard Hunt, James McCord, Eugenio Martinez, and Frank Sturgis, was part of what caused the Family Jewels to be compiled in the first place.

Exactly who answered Ford’s question remains redacted, although given the context and the fact that the rest of that exchange was between Ford and Schlesinger, it’s likely that it was the former CIA Director. If so, his response is extremely revealing. If it wasn’t Schlesinger, then his failure to contradict the statement or add anything is equally as revealing.

The second paragraph, however, is far more interesting and disturbing. According to the speaker, presumably Schlesinger, “there is a layer in the Agency [beyond] which you can never find out what is going on.” The fact that such a statement could come from, or at least go unchallenged by, a former CIA Director while in a meeting with the President, is very revealing. The fact that Schlesinger’s tenure as CIA Director began just days after the Watergate conviction of former CIA employee James McCord, and his response of commissioning what became the Family Jewels report, show that he dug into the matter a great deal. The fact that even he, as CIA Director, was unable to fully penetrate the Agency’s internal secrecy says volumes. The sentiment would be repeated to the President by former CIA Director Richard Helms the next day, when Helms told the President that “I don’t know everything which went on in the Agency; maybe no one really does.”

As a result, the speaker advised the President that “you don’t ever want to give them a clean bill of health.” Instead, the President “should defend it and call for clean actions, but not give them a wholesale acceptance.”

The President seemed to take this statement in stride, choosing to immediately focus on what to do next. To President Ford, the first step was to create a Blue Ribbon Panel, which eventually became known as the Rockefeller Commission, to address the issue. To this end, he named six people to appoint to the Rockefeller Commission, including future President Ronald Reagan. Ford noted that they also needed “one black - either Brimmer or Coleman.”

As the second step, Ford wanted the intelligence agencies to provide a written report of any activities outside of their respective charters. Finally, the President wanted to suggest a Congressional investigation by a joint committee. The President saw the Rockefeller Commission as investigating first and deciding what documentation to give to Congress.

In response to this, Schlesinger warned against denouncing the illegal activities out of hand, arguing that some were justified and “time-honored activities.” When the President asked Schlesinger to explain why he’d engaged in these activities when he went to CIA, the Secretary answered, but whatever his response was remains completely redacted.

In the midst of the chaos, Schlesinger took the opportunity to suggest reforming the Intelligence Community by restructuring it in the British model by separating clandestine and non-clandestine activities. This would have the benefit of preventing one from tinging the other while also introducing further compartmentalization.

The President took the opportunity to ask about the state of counterintelligence in the U.S. Schlesinger responded that “it’s lousy. We are being penetrated more and more. The FBI has opted out. We are in bad shape.” This came just days after James Jesus Angleton had been forced to announce his resignation, and before years of the media branding him as paranoid for his “obsession” with moles in the Agency and penetrations of the U.S. Intelligence Community.

Soon after, the meeting concluded by discussing other potential members of the future Rockefeller Commission. You can read the declassified Memorandum of Conversation below.