For the last year, MuckRock user Martin Peck has been using FOIA to perform tech audits at various federal agencies, asking for counts of various devices - such as radios - that they might possess. It was his request that led to the DEA disclosing that they had two KingFish cell site simulators.

Peck was looking something only a little less controversial than cellphone trackers when he hit his biggest snag. Back in September, Peck asked the Office of the Secretary of Defense for the number of its HotPlug devices - used in computer seizures to keep the device powered on and preserve the data - they had purchased or were in use. This week, they finally got back to him, and boy did they have something to say:

There’s a lot to unpack there, so let’s break it down, bottom to top.

And apparently there is, because when Peck asked a different agency inside of the DoD … 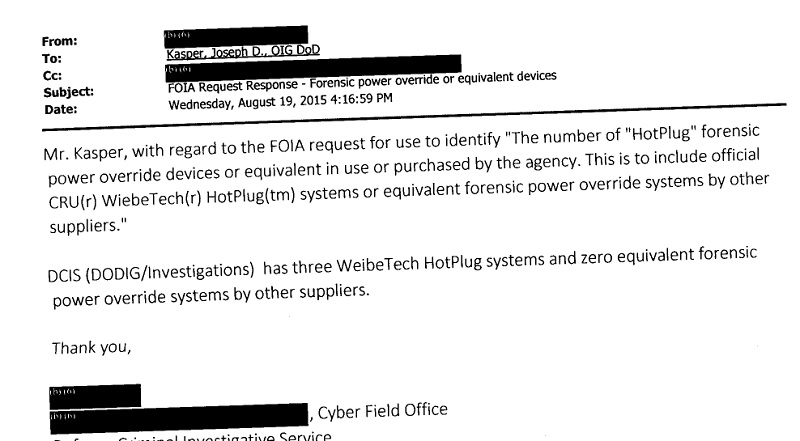 They were about to track down that number without much difficulty.

Now, the DoD OSD rather presumptuously assumed that Mr. Peck was without the financial resources of a mid-sized nation state, and administratively closed the request, leading to this moment of FOIA form letter zen:

As for Peck, we’ll leave him with the last word.

Read the full fee letter below, or on the request page.

Martin Peck sent this request to the Department of Defense, Office of the Secretary of Defense of the United States of America

Martin Peck sent this request to the Department of Defense, Office of the Inspector General of the United States of America