The passage of the PATRIOT Act has been decried as one of the most widespread attempts by the government to overreach in order to bypass the judicial and legislative restrictions that had otherwise been placed on it. The FBI file for former CIA Station Chief William F. Buckley details one such attempt, over a decade after his murder.

In late July of 2001, the FBI was responding to a FOIA request for the file on Buckley (no relation to the conservative commentator), the CIA station chief who had been kidnapped in Lebanon and later died as a result of the kidnapping. The FBI opened a case file on the FOIA request, 190-0-77656 and requested OPCA (likely the Office of Public and Congressional Affairs) to deny the request due to the investigation being “ongoing” - despite the Bureau not having touched the case for years. In yet another case of a government office breaking the spacetime continuum while denying a FOIA request, the memo was written on July 30, 2001 and memorializes a conversation which had/was going to take place the next day. 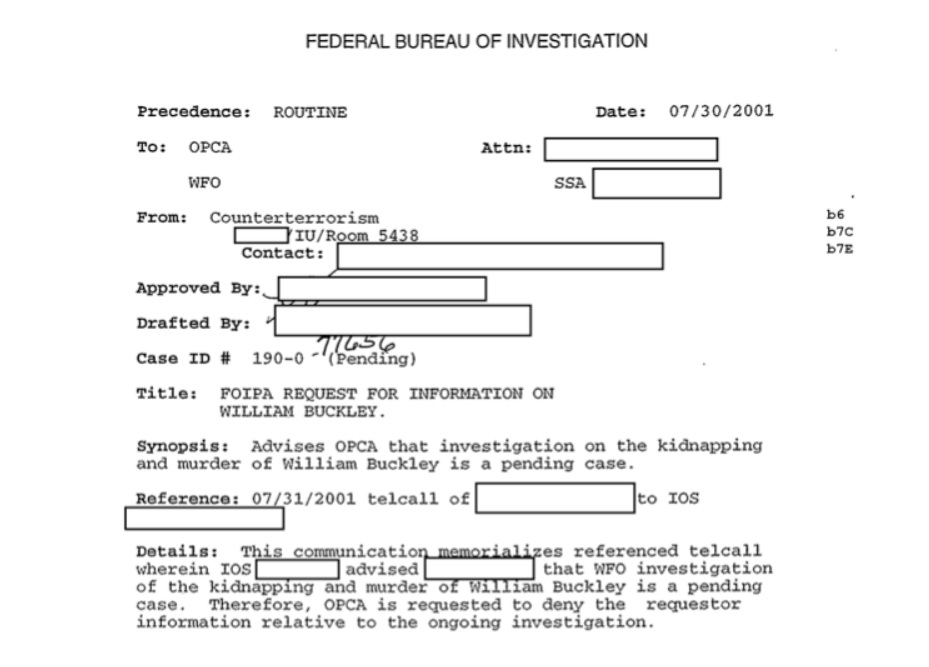 A few months later, one of the Special Agents associated with the case spoke to a Department of Justice attorney about the matter, and was informed that the Statute of Limitations had already expired for that case. This would indicate that the case should have already been closed.

According to an FBI memo written months later, a request was made on September 11, 2001 to update the case to correctly reflect the fact that it was closed and the Statute of Limitations had expired for the charge of terrorism associated with Buckley’s death. This request, however, is nowhere to be found in the FBI file. Several months later, however, a memo was sent out requesting the case be kept open/re-opened due to the September 11th terrorist attacks and the passage of the PATRIOT Act, which introduced “new possibilities.” 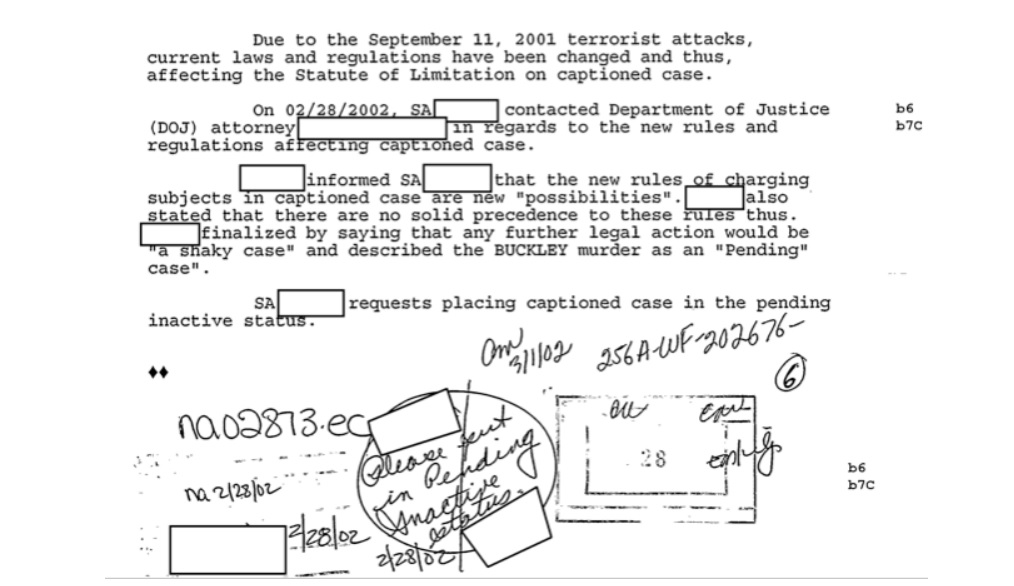 This memo was sent on February 28, 2002 and was almost certainly in response to a finding that had been issued the day before by Susan Price-Livingston. The finding stated that the PATRIOT eliminated …

“the statute of limitations for terrorism offenses that resulted in, or created a foreseeable risk of, death or serious bodily injury to another person.The act specifies that these changes apply to prosecutions of offenses committed before, on, or after its enactment on October 26, 2001. A person commits the federal crime of terrorism when he commits any one of 50 specified federal crimes intending to (1) influence or affect the conduct of government by intimidation or coercion or (2) retaliate against government conduct (18 USC § 2332b(g)(5)), as amended by Section 808 of the act (copies enclosed).”

This facet of the PATRIOT Act is one of the ones which the government largely attempted to keep out of the public eye. Even twelve years after the finding was issued, the DOJ website’s only mention of using the PATRIOT Act retroactively was discussing immigration and deportation.

After another year, the FBI still hadn’t done anything with the case. The Department of Justice attorney told the Special Agent that prosecution was “possible” but that it was a “shaky case” and a “weak candidate.”

The case was finally declared closed, and the file releasable.

Despite that, barely any of the file that was actually released included information on the case or the subject requested, of course – just the FBI’s description of the crime, a few redacted memos and the attempts to deny the FOIA request. The closest the Bureau came to releasing information on the case requested were some metadata sheets that included a computer error that was part of a page marked SECRET.

Needless to say, an appeal has already been filed over the FBI’s incomplete response, and several other FOIA requests will be filed to follow up on this matter. In the meantime, you can read the partial FBI file on William Francis Buckley below.