Kim Davis has deeply held beliefs on handing over her emails. Where Kentucky law commands officials to provide documents in digital format, the county clerk says she’s “old school on this email stuff” and insists on printing them out, at considerable cost and delay.

As a public employee, Kim Davis’s emails are subject to the Kentucky Open Records Act (KORA). A couple days before Davis was jailed for contempt of court, I requested all of her emails from the past month. When news of her visit to the Vatican embassy broke, I submitted additional requests for emails with papal keywords.

To the credit of the Rowan County clerk’s office, I emailed both requests directly to Ms. Davis, and received relatively timely replies from Kim herself. On this front, her office beats the NYPD and the CIA, which accept records requests solely by postal mail and fax, respectively, and often fail to provide an initial response for months.

But Ms. Davis replied that her inbox from the past month piled up to more than 6,000 emails, which would cost $1,200 to obtain. More than half of that fee estimate was for photocopies and postage. 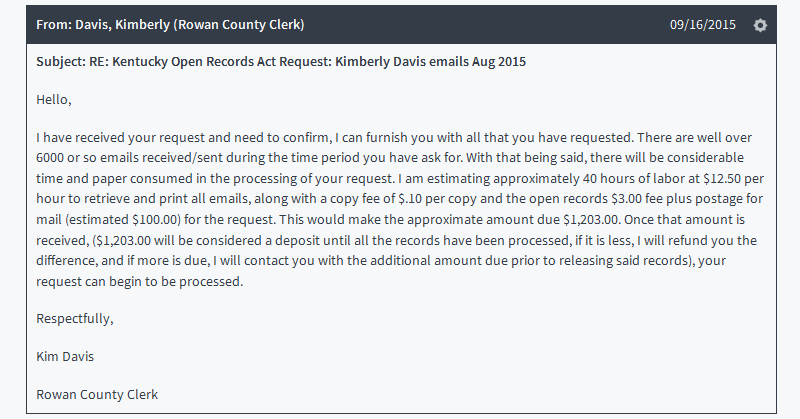 The Kentucky Open Records Act requires agencies to provide an electronic copy of a given record if the record is stored in an electronic format. So I asked whether the fee could be cut down by sending emails in a digital format.

“I do not have the means to transfer electronic [sic],” Ms. Davis replied, and reiterated her cost estimate for the month of emails.

Meanwhile, after initially claiming to have zero emails containing such keywords as “Pope” or “Vatican”, Ms. Davis acknowledged that “non-supporters” had sent her two emails on the topic. She then me asked for a fax number so that she could provide them.

I emailed back that I preferred these two emails to be forwarded along, rather than printed out and faxed, and that Kentucky statutes support my right to documents in their original format.

Again, the standard under Kentucky law, as at the federal level and in many states, is the format in which a record is stored. One clerk’s aversion to sending digital copies does not trump that standard. When I pressed on this front, Davis became frustrated and suggested that she could drop my request entirely, if she wanted.

The Kentucky attorney general’s office has, indeed, determined that agencies need not “honor” requests for records that are submitted by email. But that’s a wholly separate matter. Howsoever she requires the requests to be submitted, Kentucky law allows me to ask Kim’s office for records in their original format. Like too many government agencies, Davis insists that providing documents electronically is an indulgence, rather than an obligation.

Not to say that Kim is without plenty of “old school” playmates - the Massachusetts State Police, for instance, refused to release a roster spreadsheet in its original format. The agency printed out the roster, blacked out entire columns and scanned it back in for release, but would not give a digital copy with withheld columns deleted. Their half-justification was that “we do not release electronic spreadsheets in formats that can altered.” The state records authority rejected this rationale, and ordered the state police to release the original file.

An email should not lie with the fax machine, nor spreadsheets with the printer. This is common sense no matter what state, and also the law in many of them. Where such a best practice is also a legal requirement, a particular official’s orientation away from same-format provision is irrelevant to her obligation.

I will continue to assert my rights under Kentucky law to obtain emails as emails, not as faxes. In the meantime, we’re raising money to cover Kim’s labor costs for fulfilling the request, which still amount to more than $500. Contribute below to help us bring transparency to Rowan County!

Image via Killing The Breeze