The FBI file on outlaw icon Johnny Cash spans the years between 1969 and 1982, capturing the transition from his dark, drug-fueled days (and the associated property damage that came with it) to a concerned parent worried about anonymous threats against his family.

Released following a FOIA request by MuckRock editor JPat Brown, the file begins with Cash’s summons to court on charges related to a 1965 fire in LA. The fire, which was allegedly started by a defective exhaust system in Cash’s camper truck, destroyed 508 acres of the Los Padres National Forest and nearly wiped out the region’s California condors. Cash was ordered to pay $82,000 in damages - adjusted for inflation, that’s over half a million dollars. 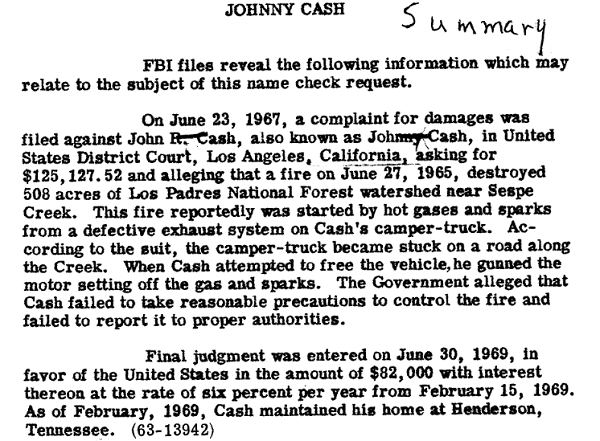 Cash tried to get out of his court date by feigning illness, but the FBI was having none of it.

Also included in earlier files is a 1965 arrest for drunkenness. Notes written in Cash’s file in 1971 acknowledge that he is a reformed drinker who “was reportedly religious and interested in the crusade of evangelist Dr. Billy Graham.”

In 1970, Cash began receiving extortion letters. One threatened, “If you want to keep your family healthy … drop $200,000.00 in old small bills in a plastic garbage bag at Old Hickory Blvd.” A suspect was arrested, but it is not clear whether a trial took place. 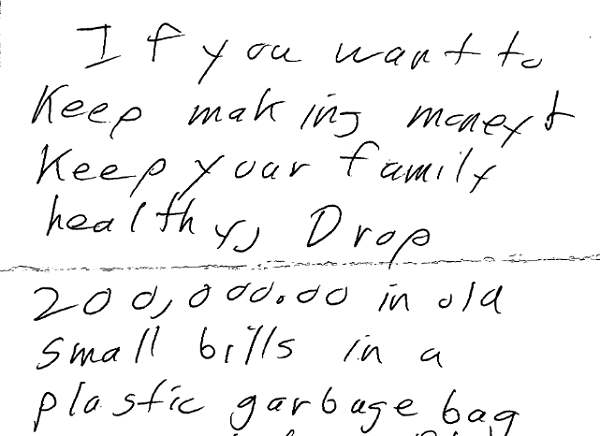 In 1978, Cash received a typed letter threatening his daughter. The author of the letter fixated on her resemblance to Cleopatra, and stated that he had a surprise for her.

“I just wanted to make sure she would never forget Xmas 1978 or me,” the author said. The letter also included typewritten pages on which same statement had been written multiple times. One said, “I would like to wish all of you a merry Christmas and the best of everything in the coming New Year.”

In 1980, another batch of letters arrived the House of Cash. A suspect was identified in this case as well. This does not appear to be the same individual who sent letters to Cash in 1970. On the front of one envelope, Cash’s address had been written inside the outline a heart.

Other letters contained barely legible writing slanting across the pages. The FBI decided to pursue no further investigation because, “the letters did not contain a specific threat in violation of the Federal Extortion statute.”

These documents offer a glimpse into a rarely seen side of the legend and are really worth a look. The first of Johnny Cash’s files has been embedded below, and the rest can be found on the request page.

Image by Heinrich Klaffs via Wikimedia Commons and is licensed under CC BY-SA 2.0