In late May 2013, an FBI agent and two state troopers went to Todashev’s apartment as part of a triple-homicide investigation. According to sworn officer statements, as Todashev confessed to committing the murders in 2011 with Tamerlan Tsarnaev, the older of the brothers who bombed the Boston Marathon, he turned violent, striking the FBI agent with a table and brandishing a metal broomstick.

The FBI agent then shot Todashev seven times, killing him.

In response to a Freedom of Information Act request filed last November by MuckRock user Evan Anderson, the FBI has released 247 out of nearly 500 pages from Todashev’s file. The bulk of the released documents are evidence logs, such as a listing of items collected from the shooting scene, including the broom stick and Todashev’s “large, Samurai type” sword. 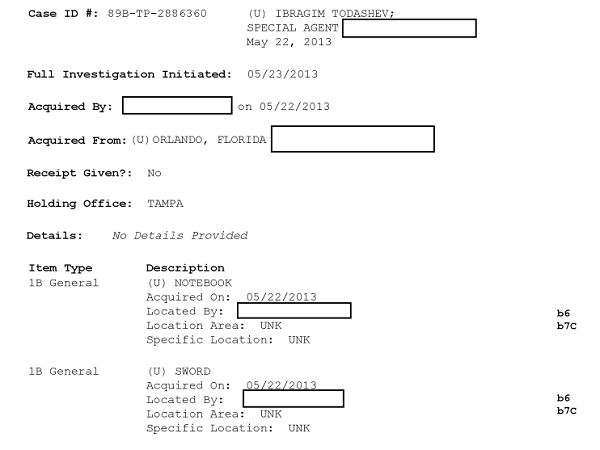 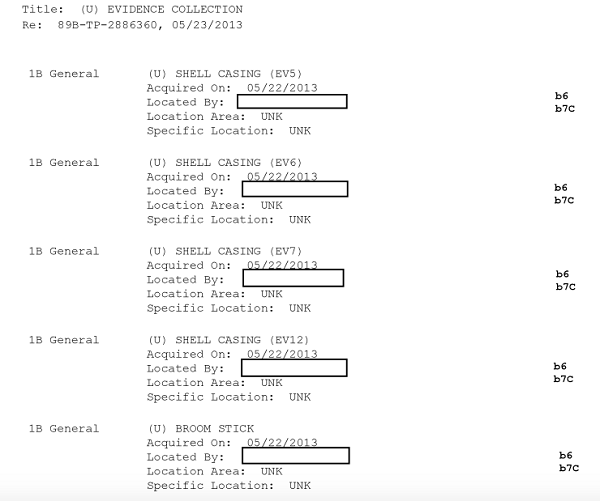 The FBI’s file also includes black-and-white photos taken inside Todashev’s apartment by the homicide squad from Orlando Police Department. Many of these images were included as attachments to the Florida state’s attorney report released in March 2014. Others do not appear to have been published previously, including haunting photographs of shell casings scattered around the apartment. 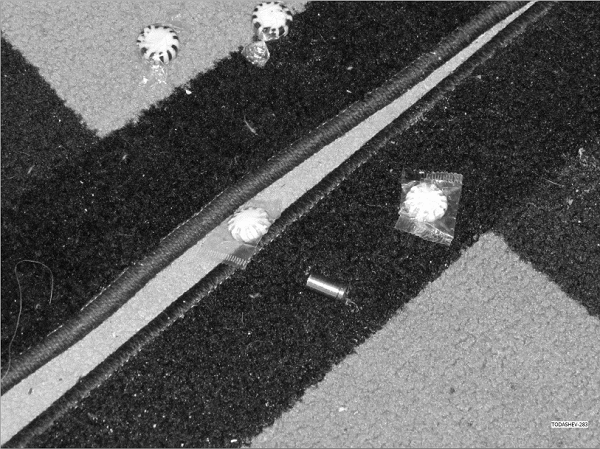 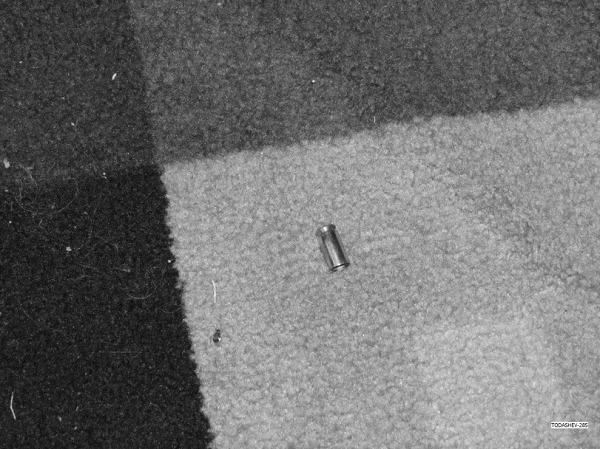 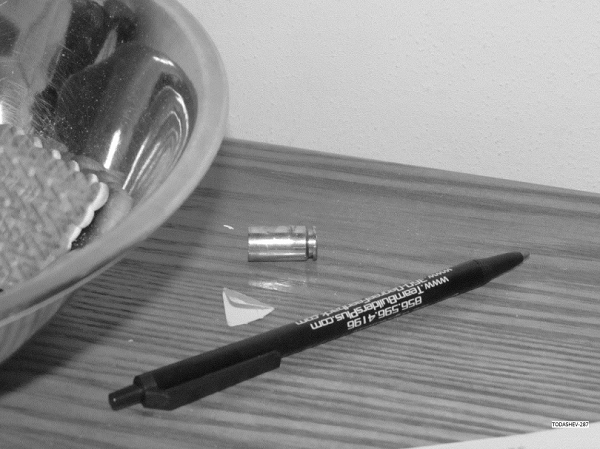 Another photo shows Todashev’s sword behind a shoe rack, where one of the state troopers stashed it when Todashev went to the bathroom. 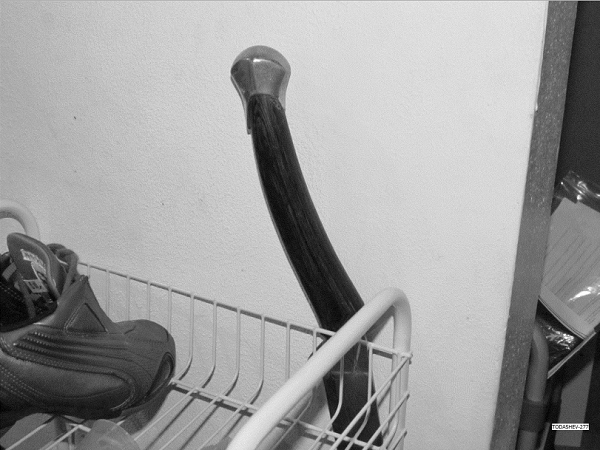 FBI agents first noticed the sword the month before the shooting, during an initial interview at Todashev’s apartment.

“While speaking with Todashev,” the agent reported, “I asked Todashev if I could look at the sword and he nodded his head affirmatively. I picked up the sword and examined it. It was sharp with writing on the blade.” 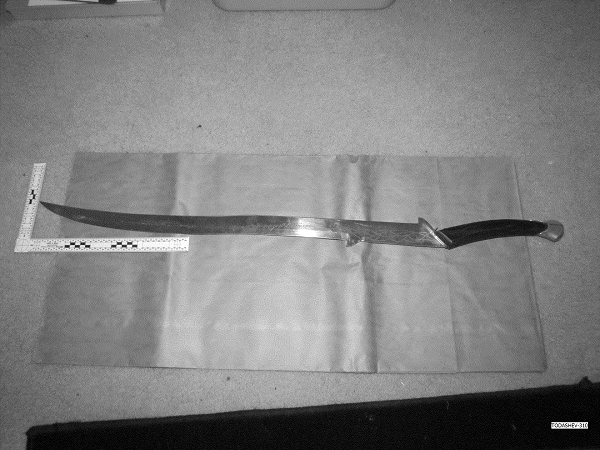 The officers’ accounts of the shooting make frequent reference to the sword.

The FBI seems to have withheld a number of documents that were already released as part of the Florida state’s attorney report, including a more detailed statement given by the special agent after the shooting, as well as summaries of interviews with Todashev’s neighbors.

The files does include a handful of interview summaries with people who knew Todashev in various capacities, including former roommates and a business acquaintance.

“Todashev did not want to be involved with anything that would get him into trouble,” one acquaintance told the FBI in a phone interview the day after the shooting.”[H]e did not drink alcohol and did not want anything to do with terrorism.”

The acquaintance characterized Todashev as “a person who lost control easily,” and reportedly suggested that he “probably made some kind of sudden motion that caused the agents to shoot him.”

On the same day, another acquaintance who had mutual friends with Todashev told the FBI that he never spoke about politics or religion. In an October 2013 interview, a fellow boxer recounted Todashev’s dreams of becoming a professional fighter. The man told interviewers that Todashev was “a good wrestler, but was terrible at boxing.”

Documents released by the FBI also describe threats against the FBI agent who shot him.

“In the weeks since the shooting, the friends and family of Todashev, as well as members of the Chechen community, have made threats of violence against the Agent that shot Todashev,” the FBI’s Boston field office summarized. 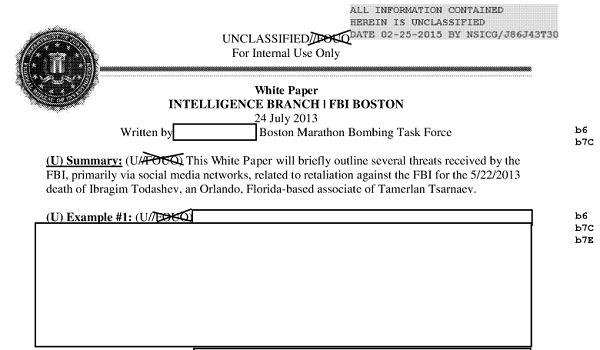 As many of these threats were “graphic and include descriptions of physical assaults and death”, the FBI requested protective measures for the agent in August 2013. For many months, officials tried to keep secret the names of the FBI agent and two Massachusetts state troopers who interviewed Todashev. But a technical redaction blunder in the report released by the Florida state attorney’s office in March 2014 revealed all three names.

The shoddy redactions quickly identified the FBI agent as Aaron McFarlane. Some digging revealed that McFarlane previously worked as a police officer with the Oakland Police Department, where it appears he had something of a checkered history. In 2002, McFarlane was accused twice of assaulting suspects. Oakland city attorneys settling both lawsuits for $32,500 total.

A year later, prosecutors accused him of falsifying a police report, although no charges were filed.

In March of this year, Todashev’s family filed a wrongful death claim against the FBI. The family alleges that the FBI was negligent in its investigation following the shooting, as well as in hiring the agent in the first place.

Their suit seeks $30 million in restitution.

Photos from the scene are embedded below, and the full file can be read on the request page.