Inmate grievance procedures are among the standard civic policies, and so, for most states, they typically can be found among the other regulations on the State’s website. With variation, there’s a usual trajectory: 1.) try to work it out, 2.) informally submit/state your grievance, 3.) formally submit your grievance on form X. The idea is to solve the problem internally, and it’s mandatory that all the necessary administrative steps be taken before the issue at hand can be taken to a higher authority. The Prisoner Litigation Reform Act, enacted in 1996, made this the law.

Originally, the intent of the act, in part, was to cut down on the many lawsuits and resulting compensations that had begun clogging the federal court systems. “[P]risoners will not ‘litigate at the drop of a hat,’ simply because they have little to lose and everything to gain. Prisoners have filed lawsuits claiming such grievances as insufficient storage locker space, being prohibited from attending a wedding anniversary party, and yes, being served creamy peanut butter instead of the chunky variety they had ordered.”.

While this may have been the case, the adding levels of bureaucratic time and effort are contributing to the inhibition of legitimate grievance relief. As private prison holdings and the prison population in general began to grow in the nineties, the number of inmate cases that made it to trial began dropping significantly. Human Rights Watch noted that after a more extensive vetting process one would expect the number of eventually successful cases to increase, this number dropped.

In private prisons, internal control over the administrative dismissal of inmate/authority communication is particularly troubling. After Minneci v. Pollard (2012), the Supreme Court ruled that Eighth Amendment “cruel and unusual” cases cannot be brought against employees of privately-owned corrections facilities. Red flags are kept inside, and, even if they get out, there are fewer rights afforded the grievers.

Of course, there are lawsuits and financial reparations made by private prison corporations to the states for violations of their contractual duties to run an efficiency and rule-abiding ship.

Corrections Corporation of America, which successfully bid to purchase and operate Lake Erie Correctional Institution in Ohio, included a list of prior contractual violations and resulting fines in its sales pitch, explaining that the amount of fines was such a small percentage of their operating budget, they should be no cause for concern.

MuckRock has been requesting the complaints and grievances made by inmates. Often, the internal grievances are maintained by the institution itself, meaning that red flags are kept within, denying the potential for outside oversight. Or the grievances are stored in each individual inmate’s file, making them part of a blanket exemption afforded to inmate files.

The Vermont Department of Corrections — which houses offenders in Kentucky at CCA’s Lee Adjustment Center — estimated that it would cost approximately $148,500 to retrieve the complaints, which are kept in individual files.

Similarly, the Winn Correctional Center in Louisiana, which claims to process roughly 1500 grievances (an estimated 30,000 pages) a year, maintains its own records and only in hard copy; the cost estimate for retrieving the grievances began with a $5000 deposit.

The complaints that have been successfully retrieved begin to give a look at how the private-public responsibility divide is hurdle of communication, at least. In Ohio, the Office of the Inspector General returned four complaints and accompanying communications regarding a forced catheterization at Lake Erie Correctional Institution that had been forwarded for review.

Upon first look, the case materials could not be found. Only later, were they retrieved and now await redaction.

It is as yet unclear what formal methods of resolving grievances proceeds from their submission. One FTC complaint against Geo Group mentions numerous internal corruptions.

Though the FTC will note with all of its released complaints that “You should know that the enclosed complaint has not necessarily be verified by the FTC,” it remains unclear whether any course of action has been taken. 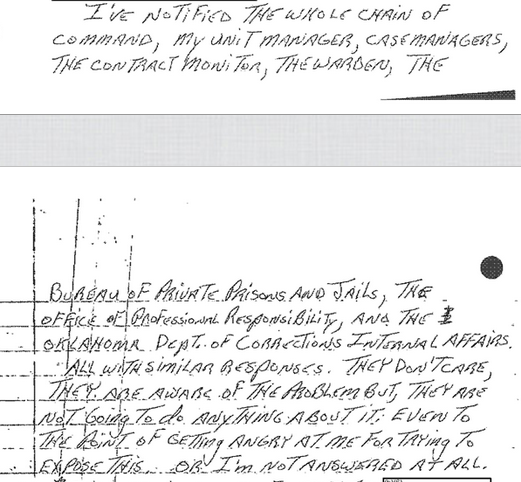 You can help MuckRock give an audience to the grievances of the private prison population by submitting your own requests to your local prison/jail, state correctional department, or the Inspector General. File your own request, or contribute to one of these related requests.

Image via California Department of Corrections

Grievances against Corrections Corporation of America