When the Associated Press submitted more than 20 FOIA requests related to the May 2011 Navy SEAL raid that killed Osama bin Laden, the Defense Department answered that it was unable to locate any responsive documents. MuckRock users received the same baffling response to similar requests: no records here.

The CIA confirmed Monday that all documents related to the raid were transferred out of DoD, and many have called foul on the shuffle. While the CIA has expanded authority to prevent release of documents related to covert operations, an agency spokesperson insisted that it was “absolutely false” that the records transfer and purge was a move to protect the documents from FOIA transparency.

Whether the transfer was a legitimate one, we now know which agency has the goods. Which means there’s only one thing to do: refile.

The revelation sprang from a draft copy of an inspector general’s report on the Defense cooperation with director Kathryn Bigelow on “Zero Dark Thirty.” The draft report, which was posted online by the Project on Government Oversight last month, indicated that U.S. Special Operations Commander William McRaven ordered the transfer of records to protect the identities of SEAL Team Six.

According to the report, McRaven described security measures for the raid team, which included “purging the combatant command’s systems of all records related to the operation and providing these records to another government agency.”

The final report omitted any reference to the records transfer, alluding instead to “other Department actions” in place of McRaven’s description.

This transfer to the CIA potentially allowed the Defense Department to respond in the negative to FOIA requests for raid documents. While the Defense FOIA office released a handful of heavily-redacted emails with some details of the raid and bin Laden’s burial at sea, MuckRock users received the same “no documents” response that the AP did upon requesting any audio, video and photos recorded by the raid team.

The Defense Department sent a sworn statement from William Kammer, chief of the Freedom of Information Division within the Executive Services Directorate, in response to both requests. Under penalty of perjury, Kammer affirmed that a search of Special Operations Command files produced no documents. 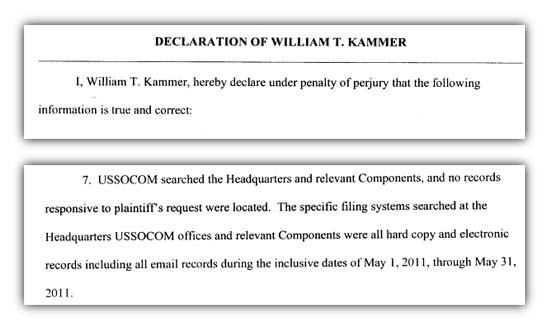 The Defense Department similarly dodged a request for documents collected during the Abbottabad mission.

MuckRock has now refiled for raid records with the CIA, as well as for details of the transfer of documents from Defense to the CIA. A specific request for audio/visual records summarily denied:

Read the released emails embedded below, or on the request page.

Michael Morisy sent this request to the Department of Defense, Office of the Secretary of Defense of the United States of America