The release of the CIA Inspector General report on the agency’s cooperation with the New York Police Department has unearthed a number of details regarding the nature and extent of the partnership. But with questions lingering regarding the CIA-NYPD relationship, this short report contains resources far beyond its 12 pages. Sifting through the report uncovers a trove of new FOIA leads waiting to be requested to flesh out this story further. 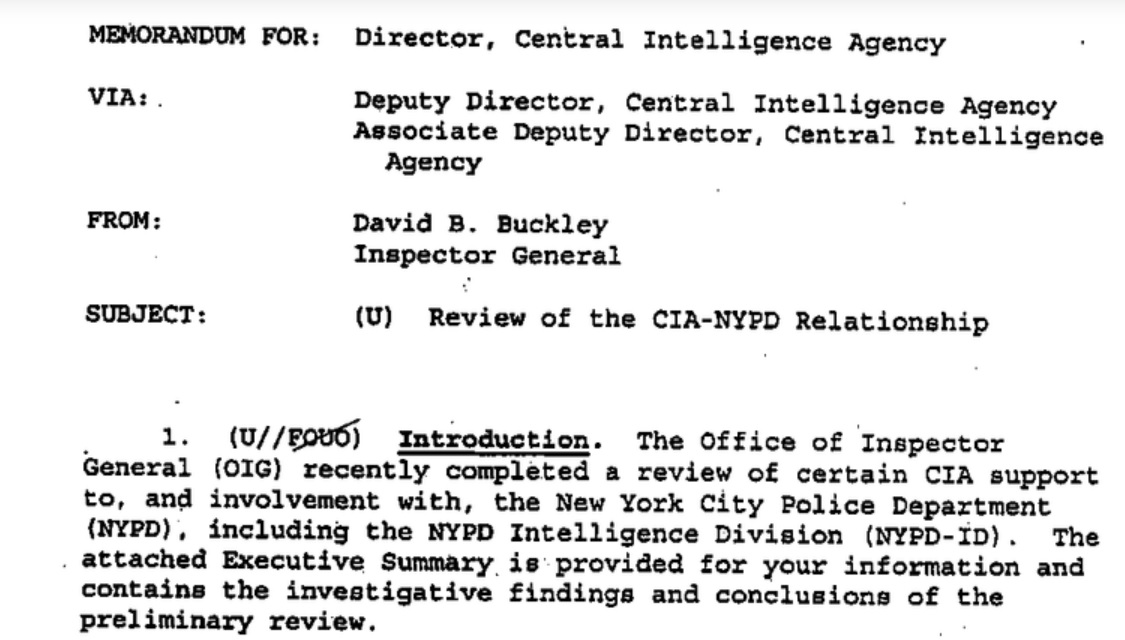 The Electronic Privacy Information Center, a civil liberties non-profit based in Washington, DC, obtained the December 2011 memo as the result of a FOIA lawsuit against the CIA. EPIC filed a FOIA request in March 2012 after a series of stories by Associated Press indicated that the CIA had collaborated with NYPD in conducting domestic surveillance of the Muslim community.

The report summarizes CIA IG David Buckley’s review of the CIA-NYPD relationship, which confirmed that four CIA agents had provided “direct assistance” to NYPD since 2002. While Buckley concluded that these agents had not violated legal constraints against CIA involvement in domestic surveillance efforts, his report highlights “a number of irregular personnel practices” and patchy legal oversight in embedding CIA agents with local law enforcement in this unprecedented way.

EPIC’s tenacity and savvy use of FOIA released this incredibly fascinating report, but the exact parameters of the CIA-NYPD relationship remain murky. Sifting through the CIA IG memo yields a slew of additional documents cited or alluded to within its 12 pages, including the investigator’s source material. This is a useful example of how one FOIA request and responsive document often spawns follow-up requests in the search for the whole story.

Before diving into the IG report itself, there are a number of stock follow-up requests that apply more broadly in cases when government agencies release high-profile documents like these. These follow-up FOIAs can allow a fascinating look into the agency itself and provide context for the documents themselves. First, there is a considerable paper trail behind every federal records requests, much of which is itself subject to release under FOIA.

MuckRock user Jason Smathers has successfully requested processing notes from a number of agencies, including the NSA, Army and Navy. Since EPIC even cited its case number in its lawsuit against the CIA, it is incredibly easy to request the processing notes for their FOIA request, which you can follow here.

In addition to FOIA-ing the FOIA, requesting an agency’s “damage control” documents is often an effective strategy following a significant disclosure or release like this one. Emails and other communications from agency chiefs is often a good place to start, as we’ve done here for CIA Director John O. Brennan and the CIA Inspector General.

Large agencies like the CIA also have public relations staffers whose job it is control messaging around events like these. Requesting an agency spokesperson’s talking points is another quick follow-up. Talking points memos from Customs and Border Protection and the Postal Service provide insight into what sort of documents to expect back.

Follow our request for CIA talking points related to the IG report here.

The report obtained by EPIC under FOIA was a final outcome document from a wider investigation involving seven investigators, one attorney and a research assistant within the CIA Inspector General’s office. Any lengthy investigation of this scale generates a mountain of records, including interview transcripts, progress reports and staff communications with subjects. The report indicates that IG investigators conducted 33 interviews and reviewed thousands of pages of documentation, including “cables, emails, official correspondence, Congressional briefing notes, personnel and security files, and Agency biographies.” EPIC deftly included these documents in their original FOIA request to the CIA, but so far nothing like this has been published.

Memos and communications between the CIA and NYPD regarding the arrangement are also fair game. While the report cites a lack of documentation overall, it identifies a few key documents worth pursuing, including a concept of operations (CONOPS) for intelligence assistance to NYPD, approval requests from embedded CIA agents and a handful of memorandums of agreement (MOAs) that seemingly outline just how CIA agents were to interface with NYPD.

The report also mentions a handful of reports, briefs and inter-agency communications from the Office of the Inspector General to other components within the CIA. These documents are similarly subject to FOIA.

Even brief documents like an IG report executive summary can be incredibly useful jumping off points for subsequent investigation. With a critical eye and patience, FOIA can bring the transparency and public scrutiny appropriate to complex issues like these.

Image by Ed Yourdon via Wikimedia Commons and is licensed under CC BY-SA 2.0