Tennessee’s state law enforcement agency has decided that it will automatically deny all records requests from out-of-state requestors because it can.

I found this out last month after requesting suspicious activity reports for the last year from the Tennessee Bureau of Investigation. Tennessee’s open records law says the state must make records open for inspection to “any citizen of this state,” which TBI has interpreted to mean that requests from out-of-state residents are automatically rejected.

“Since it appears that you are not a citizen of the state of Tennessee, your request is denied,” TBI spokeswoman Jeanne Broadwell said in her email rejecting the request.

It’s worth noting that Tennessee’s open records counsel has said that denying records to out of state residents is not required, but discretionary. Broadwell did not say how TBI came to its interpretation that the law meant to automatically deny all out-of-state requests. 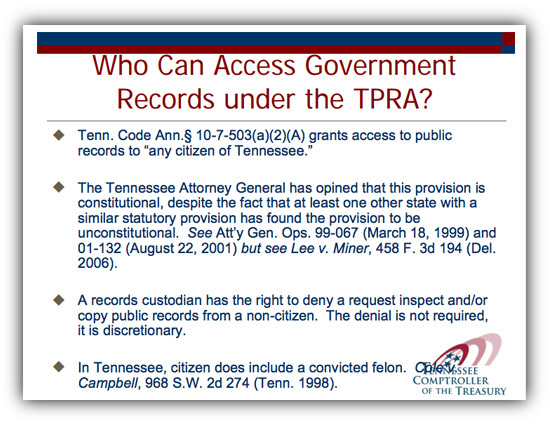 “I am aware that our law does not require us to deny your request based on the fact that you are not a citizen of Tennessee. However, that fact is the basis of our continued denial of your request.”

Other than a formality, it’s still unclear what the difference would be if I requested the records as an out-of-state requester versus having a Tennessee resident do it, other than where I happen to live. If the state feels it appropriate to deny records based on such a low-level detail, it is clearly missing the point of open records laws in the first place. TBI’s interpretation adds another obstacle for the public to obtain information about their government. It delays out-of-state requestors from getting information and adds another obstacle (having to prove their residency) to in-state residents.

In light of my rejection, MuckRock has filed my request again with TBI, this time using a proxy who has agreed to lend in-state credentials to cases such as these.

My records was request was the first in an effort to try and free up some SARs to show what kind of information law enforcement agencies are getting and what it looks like coming in. Local, federal and state agencies encourage citizens and police to file SARs if they witness behavior or combinations of behavior that may be indicative of terrorism-related activities. Agencies have launched campaigns and developed guides for the public on what kinds of activities to report, but for the amount of time spent telling people to say something if they see something, there isn’t a lot of information publicly available to gauge if these programs are actually effective.

These reports could not only provide a look into what kinds of things the general public (rightly or wrongly) see as suspicious, but it would provide information that could aid in measuring the worth of suspicious activity reporting programs. Additionally, one federal guide on SARs notes that factors like race, age, national origin or religious affiliation should not be included in these reports. Releasing these reports would provide information on how often these types of were actually being followed.