In the wake of Sanjay Gupta’s marijuana mea culpa, older emails outline the National Cancer Institute’s tussle with the National Institute on Drug Abuse in 2011 over the dangers — and benefits — of medicinal pot. While the final version carried only limited revisions, its authors pushed back against allowing “politics to trump science.”

CNN’s Dr. Sanjay Gupta lit up headlines yesterday by apologizing for his long-standing opposition to pot. Gupta blasted the criminalization of marijuana as scientifically unfounded:

I mistakenly believed the Drug Enforcement Agency listed marijuana as a schedule 1 substance because of sound scientific proof. [....] They didn’t have the science to support that claim, and I now know that when it comes to marijuana neither of those things are true. It doesn’t have a high potential for abuse, and there are very legitimate medical applications. In fact, sometimes marijuana is the only thing that works.

Gupta focused particular criticism on the structural hurdles that dissuade many researchers from studying marijuana at all:

When marijuana became a schedule 1 substance, there was a request to fill a “void in our knowledge.” In the United States, that has been challenging because of the infrastructure surrounding the study of an illegal substance, with a drug abuse organization at the heart of the approval process.

First of all, you need marijuana. And marijuana is illegal. You see the problem. [....] The second thing you need is approval, and the scientists I interviewed kept reminding me how tedious that can be. While a cancer study may first be evaluated by the National Cancer Institute, or a pain study may go through the National Institute for Neurological Disorders, there is one more approval required for marijuana: NIDA, the National Institute on Drug Abuse. It is an organization that has a core mission of studying drug abuse, as opposed to benefit.

Back in 2011, MuckRock user Phil Mocek filed a number of FOIA requests around a National Cancer Institute review of marijuana. In late March 2011, NCI’s Physician Data Query (PDQ) published a review of efficacy evidence for medicinal marijuana as part of its complementary and alternative medicine series. After a number of blogs and drug policy reform organizations shared the report, the NIDA reached out to NCI’s editorial board with talking points and suggested changes that struck many as politicizing research. Mocek obtained reams of emails outlining the back-and-forth within NCI and between the report’s authors and NIDA.

Emails obtained from NCI’s editorial board outline the extensive revision process to which the report was submitted even before NIDA stepped in. The doctors and researchers of NCI weighed the political implications of the summary even in initial drafts, opting for hyper-clinical and precise language. “Smoking,” for instance, was scrubbed throughout the report for “inhaled.”

After NCI published the summary, which has since been updated in July 2013, representatives from NIDA reached out with concerns. They requested the editorial board amend the request with a front-page disclaimer of the FDA’s non-approval of medical marijuana, as well as for links to NIDA materials to be added in the report’s “Adverse Effects” section. 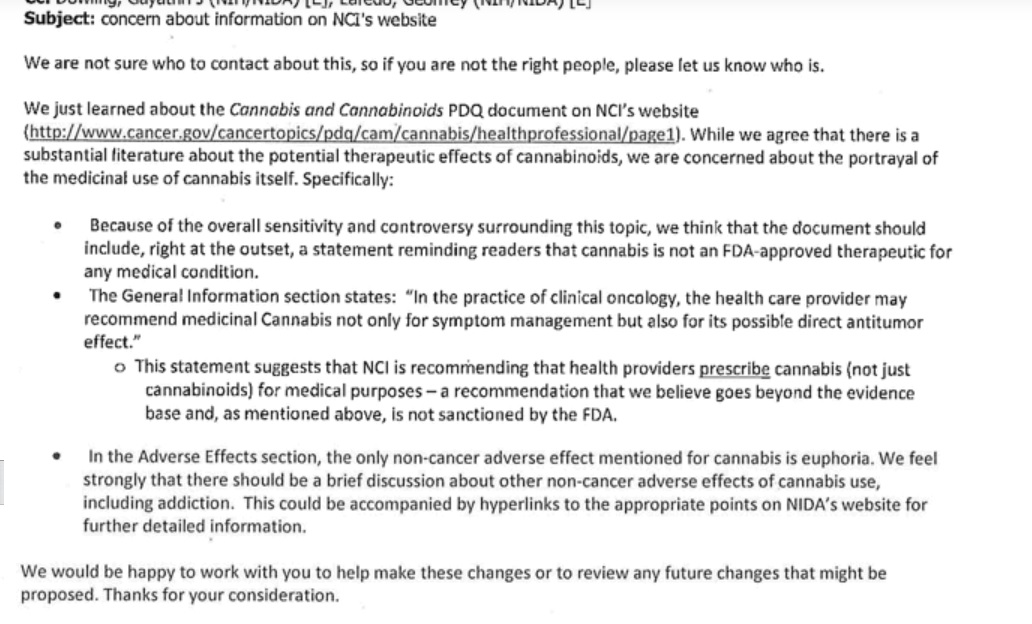 (And yes, your read that right - “euphoria” is considered an adverse effect.)

The NIDA also passed along talking points distributed around their agency, which emphasizes the supposed addictive risks of marijuana use and other adverse effects both short- and long-term. 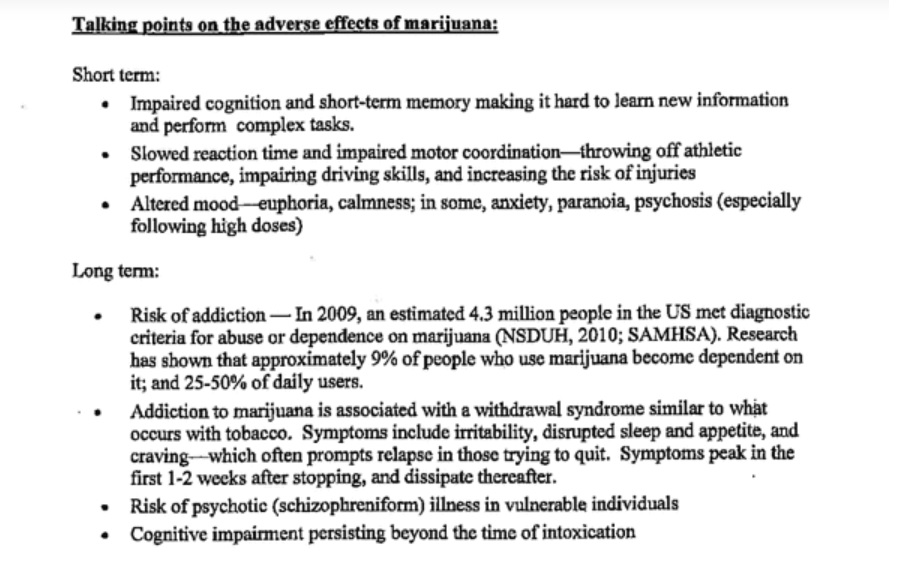 The report’s author, Dr. Donald Abrams of San Francisco, bristled at the intervention of NIDA into NCI publications. His concerns were so grave that he threatened to resign from the PDQ editorial board “if we allow politics to trump science.”

Abrams requested that the full board discuss the “NIDA induced alterations” before taking any action. Another member of the board was likewise adamant that any revisions make clear that NCI was not “bowing to NIDA,” while a third emailed the editor-in-chief to remind him that “NCI doesn’t tell NIDA what to put on their website!”

The PDQ editorial board made a limited number of revisions to the summary, in consultation with Dr. Abrams and his colleagues. In a statement, the board emphasized its editorial independence and insisted that the changes were not “influenced by NCI or any other federal agency.” According to the statement, all revisions were made to “correct several possible misinterpretations” and to “clarify the meaning that the Board originally intended to convey.”

The first release is embedded below, and the rest can be found on the request page.