It’s not all fun and games at the General Services Administration. You may get to travel “waste and abuse” style to Las Vegas and Hawaii, but one day your toilet may explode without warning.

Six months after what was probably the worst Monday of all time for two GSA employees and the symbol du jour of broken government, documents requested by Jason Smathers have shed light on a restroom disaster deemed the result of an aging plumbing system and human error.

Shortly after the exploding toilet injured two GSA employees in Washington, D.C., few details beyond the fact that the injuries were not life-threatening made their way to media and bloggers hungry for metaphors of Washington politics - until now.

The internal emails released to Smathers from GSA provide insight into the panic. While the agency withheld 90 documents under privacy exemptions (redactions Smathers is appealing), the back-and-forth between employees reveals new details about what happened that fateful day. 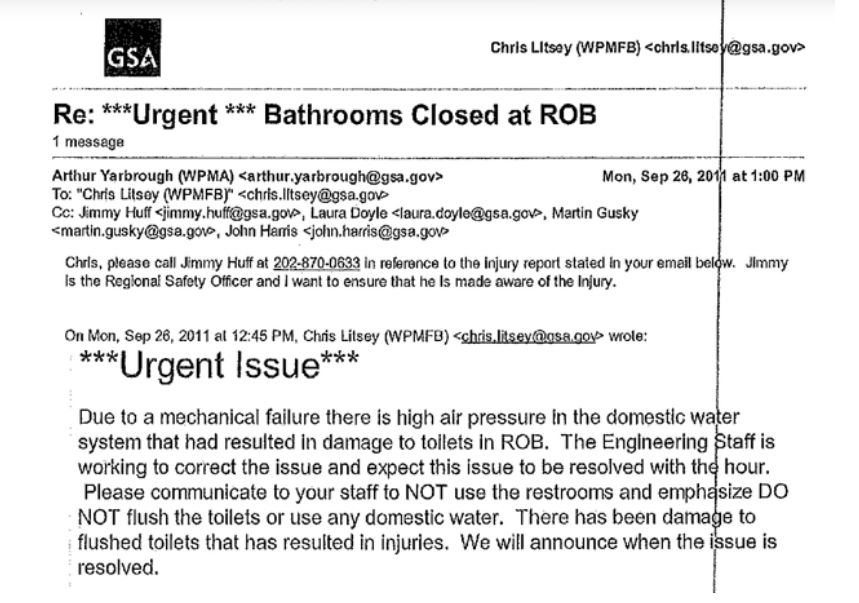 As Supervisory Property Manager Chris Litsey tells it, he responded to an emergency call from a restroom to find a nurse on the scene treating someone injured “by the fragment of a broken toilet bowl.”

“People on site told us that the toilet ‘exploded,’” the manager wrote. “We found at the time that the waterlines to toilets in that restroom were dry and flushing the toilets created a loud and startling sound, and also ejected the remaining water from the bowl.”

As the manager finished surveying the scene, another call came in for a person injured by a toilet on a separate floor. Litsey put out an announcement that the restrooms had closed and purged the system of compressed air that had been flowing into the building’s water tank.

Several other toilets were found damaged while Litsey and staff corrected the issues. The next day, as news reports circulated, Litsey’s theory was that someone had turned the compressor on manually and “left it unattended.”

While the extent of the injuries is unstated in these exchanges, at least some of the employees saw the humor in the situation.

Even the title of the final incident report included what one can only hope was a Washington-esque attempt at deadpan humor: “Domestic Water Incident summary.”